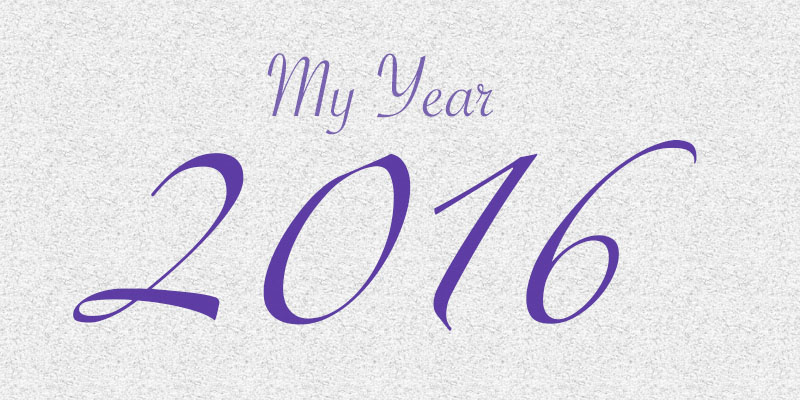 And there it is… The end of the year 2016. When did time pass by so fast ? I think the older I get, the faster time runs. I bet there are some scientific proofs for this.
I now want to share my end-of-the-year review with you.

This year was definitively my year of travelling. 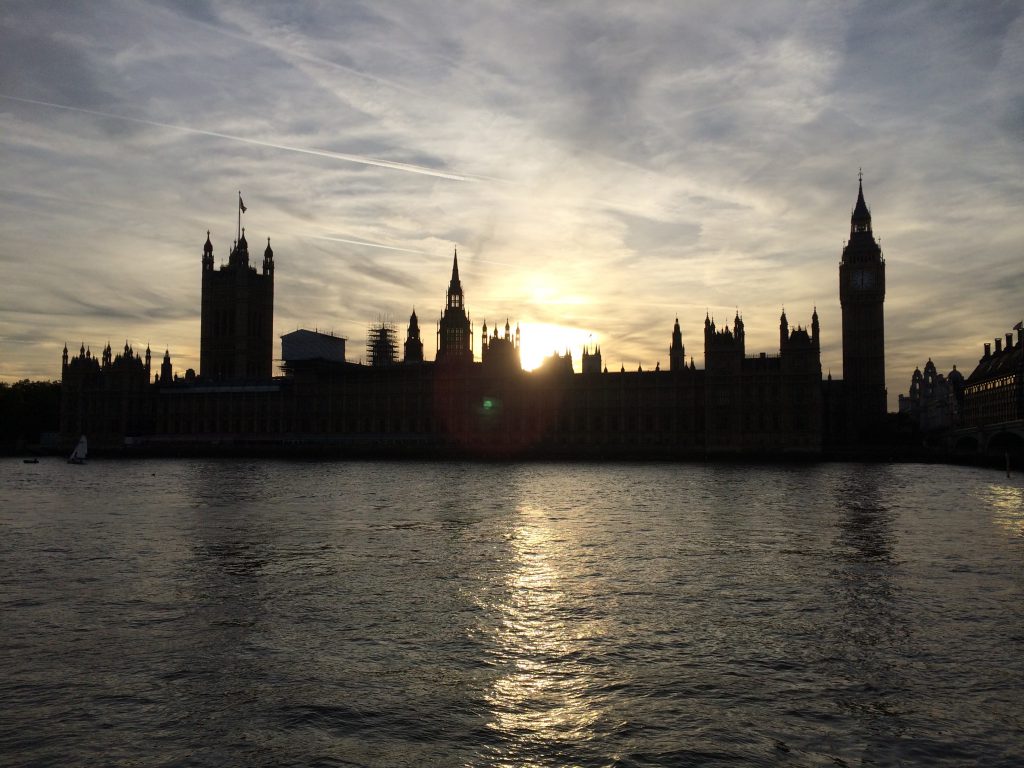 I started this year in London. Not as a vacation but as my home. I learnt a lot there, I grew, I met a lot of amazing people who became my friends.
At the end of January I moved back to Cologne. It’s unbelievable that it’s almost one year ago.

Back in Cologne, in my old flat, and everything was just as it was before. Except for me. I think I changed and it felt weird, that the world around me didn’t. But I guess that’s normal when you where away for a while. After a few weeks/months back home the feeling vanishes anyway.
I started my internship at a company, that I still work for today.  Without my job I wouldn’t have travelled that much this year.

I’m quite often in Zurich, because of my boyfriend. At the beginning of the year we went skiing nearby. It was my first time, but I think I wasn’t that bad and it was real fun. 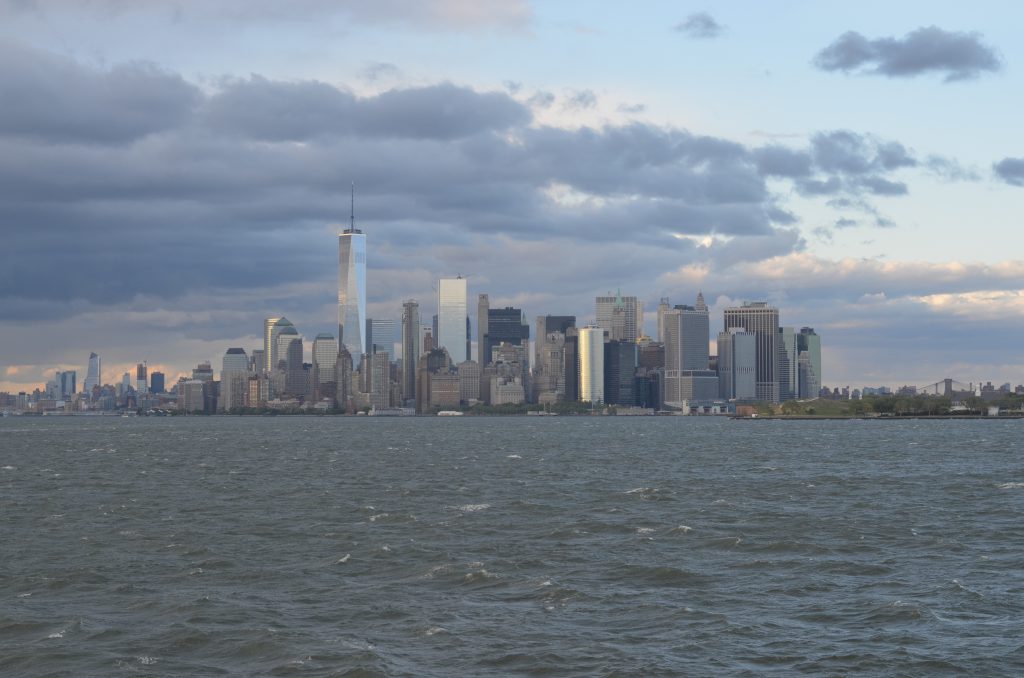 One of my highlights this year. NEW YORK!
My boyfriend and I went there in May. I could tell you so much about this awesome city but that would be a whole blog post on its own. So here are some short tipps for those of you who are going to visit the city.

One highlight after the other. To celebrate the original and traditional Midsommar in Sweden was one of the best things that I ever did in summer. Sweden is just beautiful ! Breathtaking beautiful! I wanted to move there immediately.
I visited a friend from London there. And so did the whole “London-Girl” Crew. Perfect!
When you ever get the opportunity to celebrate Midsommar in Sweden, go for it!
We celebrated the whole day. We started early and went to the location which was surrounded by nature and nature and more nature. Small house in the middle of nowhere next to a lake.
We started by making wreath of flowers. And I have to say, that mine wasn’t too bad for the first time 🙂
We had a lot of really good food and while eating we sang swedish songs and drank a shot afterwards. Really disgusting shots but we were told that they have to taste awful 😀
We also played small games. One of them lead to the lake, where we went swimming.
You know… What shall I tell you more? Sun, beautiful nature, flowers, good food, drinks, swimming… It was so much fun!
In the evening the real party started until one after the other fell asleep in the tent.
I would definitively go to Sweden for Midsommar again in 2017 or I will do my own party in Cologne 🙂 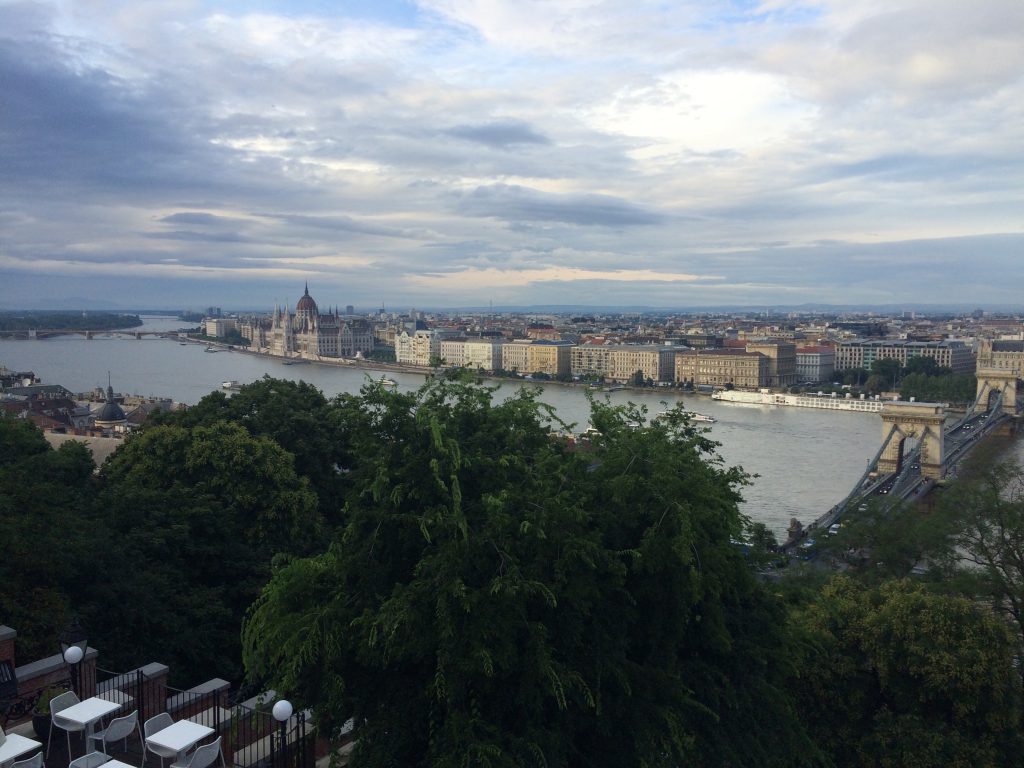 I did a short trip with a friend from Cologne to Berlin to Bratislava to Budapest and back again to Cologne.

Berlin was only a short stop where we had a lot of coffee and some food. When we arrived in Bratislava we met some nice people, that we spend some time with afterwards.
Bratislava is not that big but it’s worth a trip. It’s really cute. But after two days we saw many things twice.
From Bratislava we took the train to Budapest. And you know… it’s true what everyone is saying about Budapest. It is beautiful!
There live a lot of students, that really enjoy partying. We had so much fun! But this cost us almost the whole next day, because of my hangover.
Budapest is really worth a trip!

As I said at the beginning my job brought me to a lot of places this year. One of them was Barcelona. After one week of work, I had some days off to explore the city. Barcelona is really nice but I don’t like the beach. There are too many people and too many who want to sell stuff to you. I don’t know what to tell you. I guess I liked Barcelona 50/50. There are really nice places but also others that you don’t really need to see. But I have to add, that I haven’t seen everything. What was really nice was our little hiking to the hill next to Park Güell. 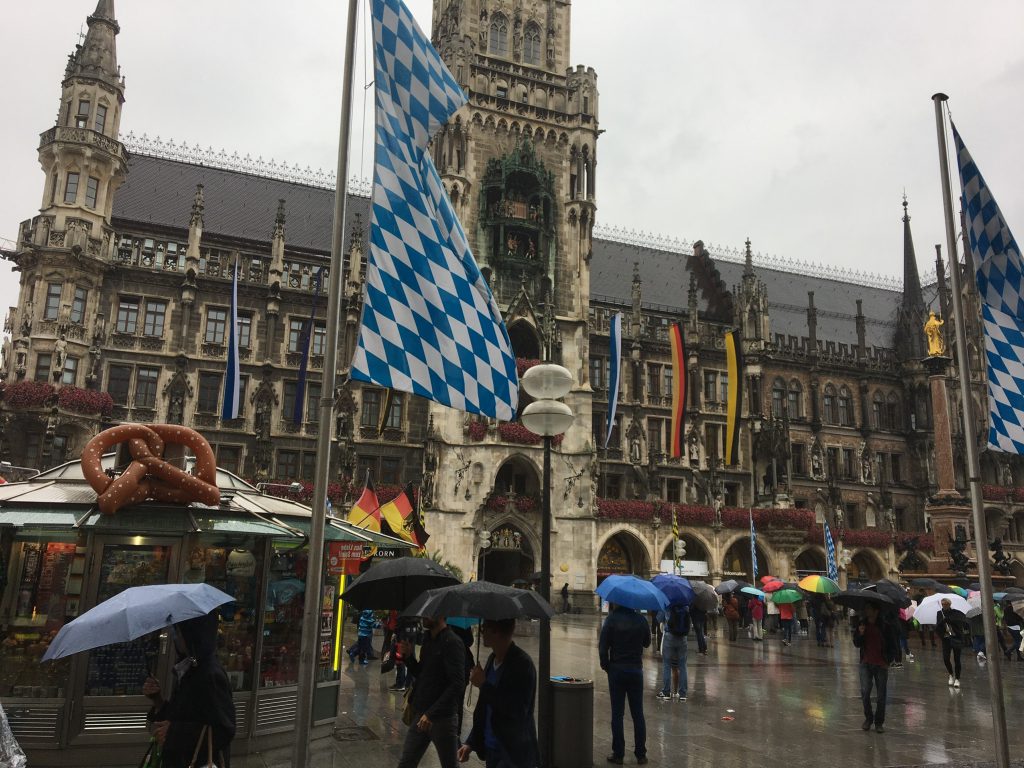 This year was my first time at the “Oktoberfest” in Munich. My best friend and I visited a friend there, who lives in a casern there. Sleeping in a casern was also a premiere for me.

Munich is so pretty. Although we had really bad luck with the weather as it was raining and freezing cold the whole time, I really enjoyed the city.

The Oktoberfest is not my thing though. It’s a bit like Karneval. People wear “costumes”, start drinking beer in the morning and sit in tents to listen to weird music. I love Karneval but I do not love Oktoberfest. I didn’t like the beer although I usually like beer. And I couldn’t stomach it. What I also didn’t like in comparison to Karneval was, that we were just sitting at our tables and didn’t get in touch with other people. On Karneval everyone is talking to everyone. All people are nice on Karneval in Cologne 🙂 #karnevalfan #lovekarneval

Guys… I’ve never travelled this far. South Korea ! Awesome.
I worked there for a week and then I had two days off. I also got a new tattoo there. 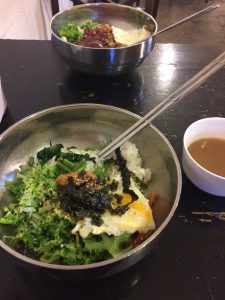 The people in Korea are super friendly, polite, reserved and kind. The city is amazing. My hostel was in Hongdae which is kind of “the place to be” I guess. There are a lot of shops, bars, restaurants and clubs.
I also visited a palace and an old traditional village. Everything was so overwhelming for me.
But the best about Korea? The food! No matter what I tried, everything was good. My new favourite food is Bibimbap! Yum!

Again a work trip: Marrakesh. We only had a few hours to visit the popular market. The people in Morocco are the absolute opposite to the people in Korea. They are not polite and reserved. They are trying to sell everything to you.
I was really angry about the people who captivated monkeys. The monkeys were in chains and the guys dragged them everywhere. Awful. Almost the same with the cobras.
I couldn’t take a lot of pictures, because they all were angry when you took a picture without paying.
But there were also a lot of good things 🙂 Everything was so colourful and the smell was (not all the time) so good when you passed a booth with food or herbs. And 30° degrees at the end of October wasn’t that bad either 🙂

The best tipps I could give for Morocco are: #1 do not drink tap water. Even avoid ice cubes. Although I was very careful I had some trouble. #2 haggle over the taxi bill. BEFORE the ride. 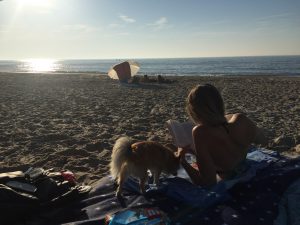 Some other destinations were Berlin, Halle/Leipzig, Mannheim, Vienna and twice the sea in Netherlands.

I hope I didn’t bore you. It was fun to think about all the places, that I’ve been this year, again. 🙂
Where have you been this year? Or what did your year make special ?
If you want some more information about some of the places feel free to contact me 🙂

This site uses Akismet to reduce spam. Learn how your comment data is processed. 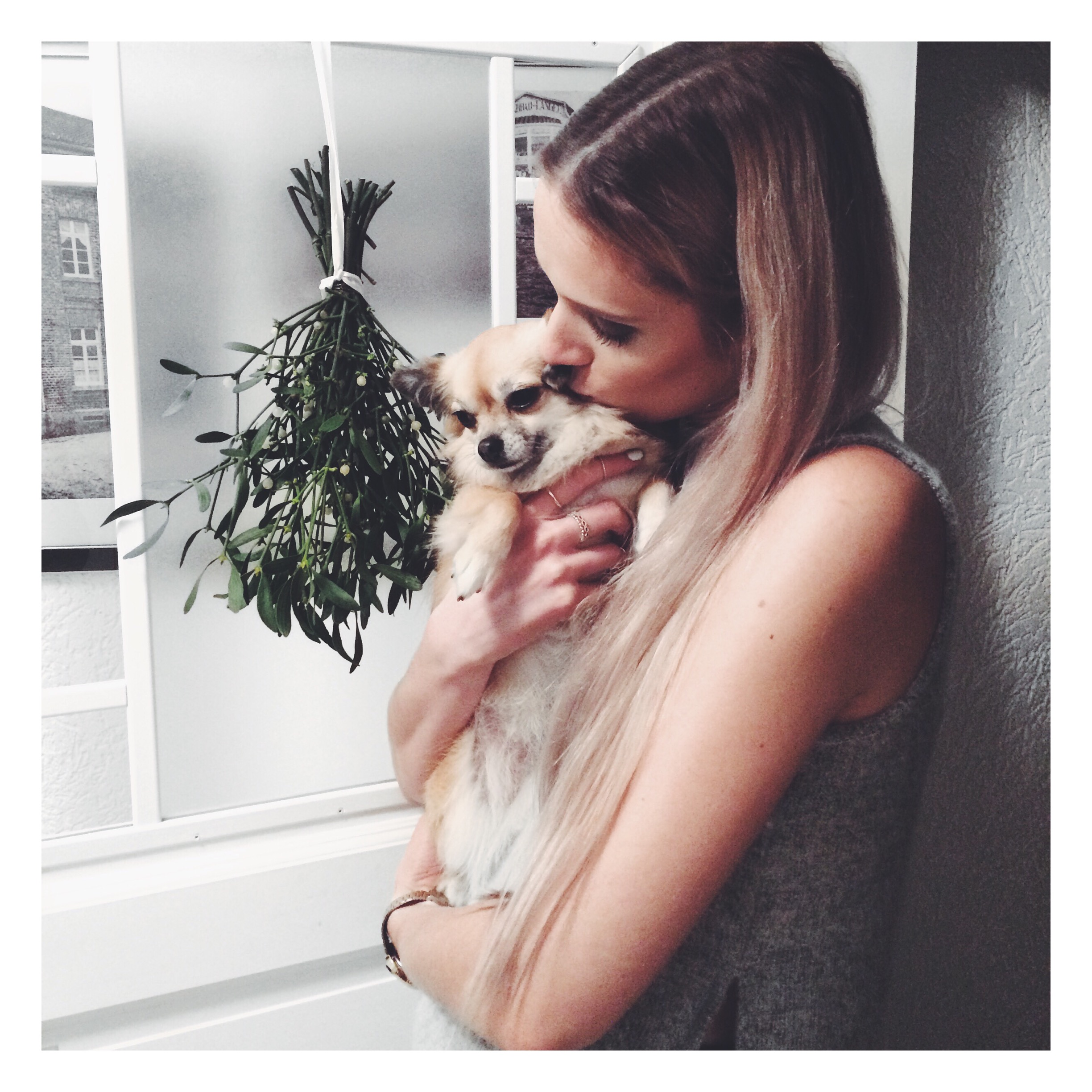 *Cooperation: the shown products were given to me for free. I am not paid for posting anything about the products.
‘affiliate link

My name is Activello and I am an awesome WordPress blog theme for photography, food, travel and other blogs. I was created by colorlib.

This Theme Is AdSense Ready